Thanks to ALL who support, ride and sponsor!

Be sure to come out and join us!

We are expecting great things for our 2022 Teddy Bear Ride on Sept 18th!

We have a new ride going through some beautiful rolling back roads that you will love!

Hundreds of Riders came out last year to enjoy and support.

Over 300 Motorcycles participated in the 27-mile fully Police escorted ride.

650-700 Teddy Bear/Stuffed Animals were collected for the Children. They will be used to comfort the children seen by the CAC.

A Grand Total of $47,000.00 was raised for the Rockwall County Children’s Advocacy Center for our 6th annual Bikes for Tykes Teddy Bear Ride!

Hosted By AGMC
Texas 28A

We are looking forward to having your support and help for this year’s event September 18, 2022!

We are all set for Sept 18th, 2022 starting at the Rockwall County Court House!!

And, YES!!! This event is open to the community, not just motorcycles riders! We have a lot to look at and experience for the whole family!

CHECK OUT OUR GALLERY! 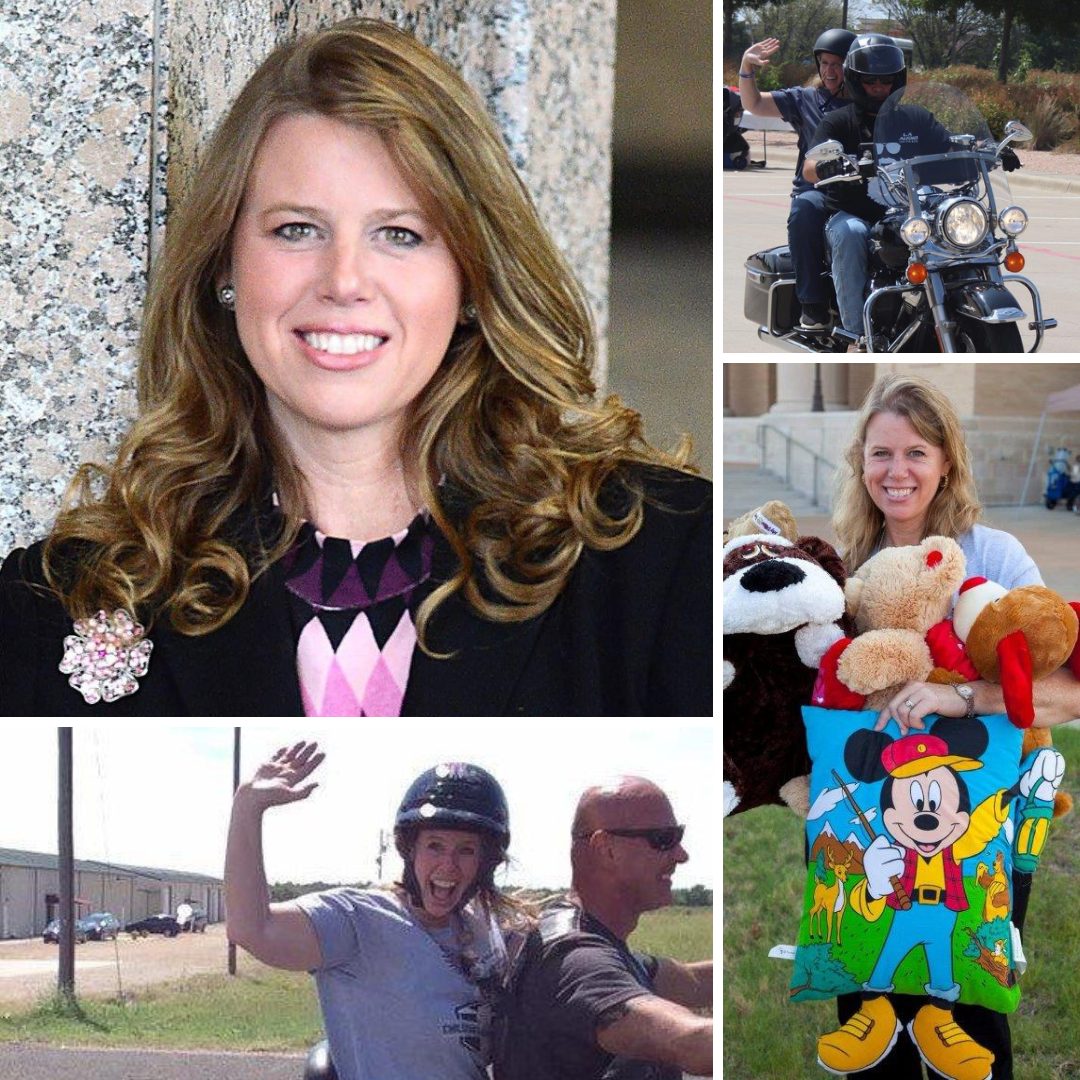 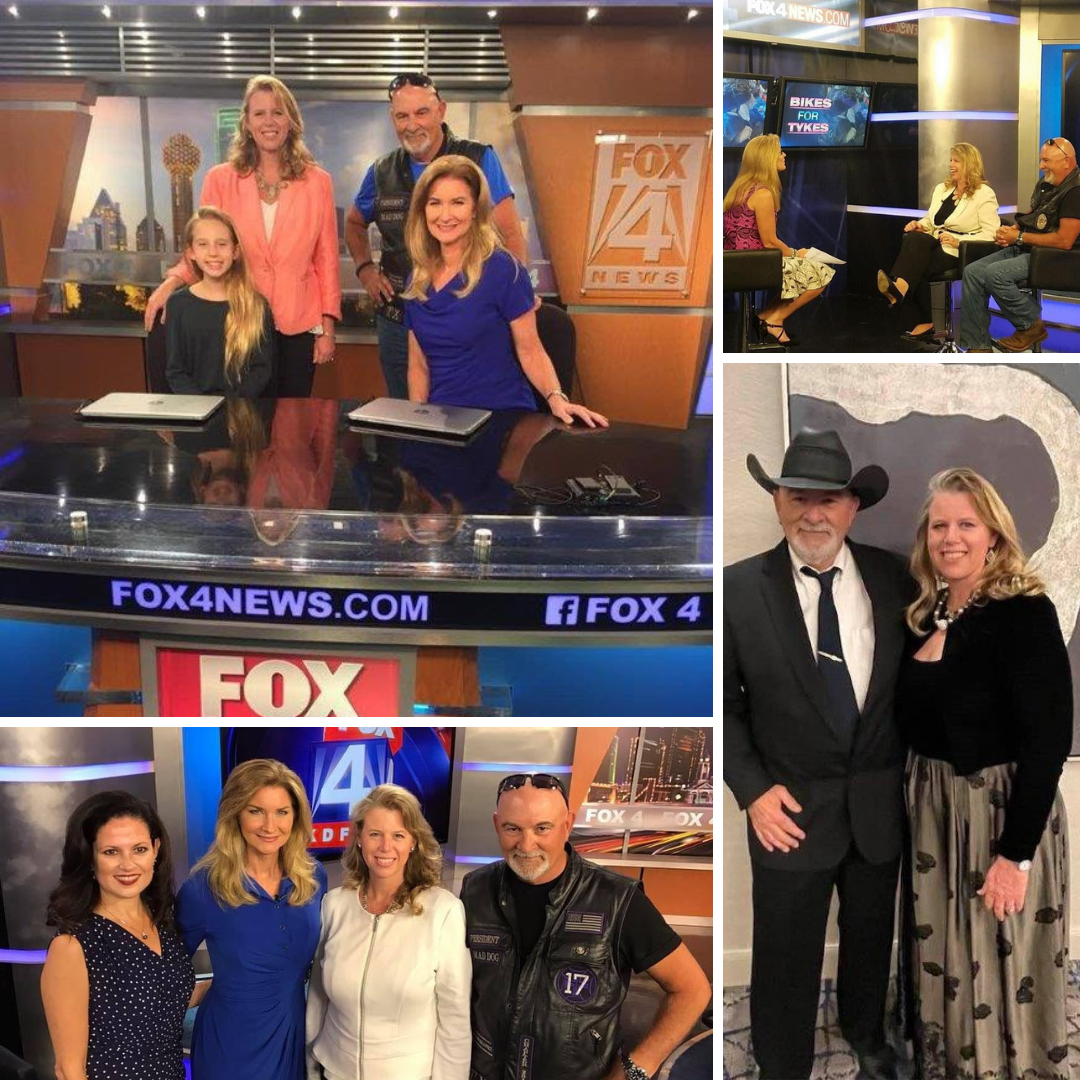 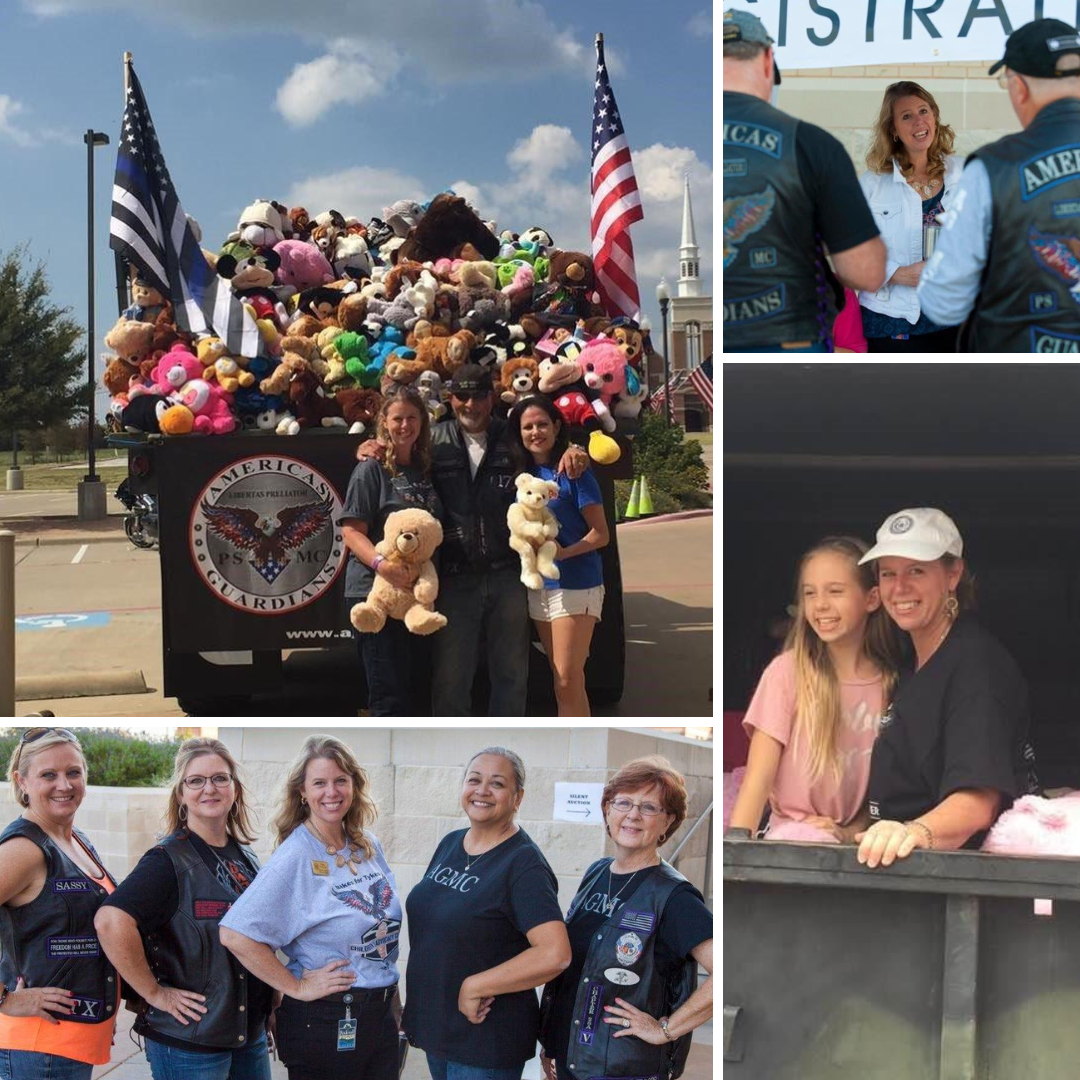 As child abuse cases climbed and as the top Law Enforcement Officer and Prosecutor in Rockwall County, she saw the need for Rockwall County to house their own CAC instead of relying on the services of Children’s Advocacy Centers from surrounding counties.

In 2015 a unique collaboration between Kenda Culpepper and a local group of Bikers (Americas Guardians Law Enforcement/Public Safety Motorcycle Club) came together in and effort to bring Awareness to the plight of Child Abuse and Neglect in Rockwall County. Thus the Rockwall County “Bikes for Tykes Teddy Bear Ride” was born.

The first Teddy Bear Ride/Event was very successful raising over $25,000 helping to launch the reality of bringing Rockwall County their own Children’s Advocacy Center. AGMC became one of 6 Founding Guild Members for the Rockwall County CAC.

This unique collaboration continues as the 7th Annual Bike for Tykes Teddy Bear Ride will be held on September 18, 2022. Bikes for Tykes and AGMC are Proud to have District Attorney Kenda Culpepper as the 2022 Grand Marshal for this event.

Among her many, many accolades and honors Kenda was recently named one of the Five Best Prosecutors in America by the Manhattan Institute! Here is the article that came out;

She was elected district attorney in 2008. For the last 14 years, serving next door to a district attorney’s office in Dallas that has seen enormous changes in approach, Culpepper has witnessed both the good and bad in criminal-justice reforms. Through it all, she has kept a steady course, punishing violent criminals and protecting victims while upholding the ethical rules for prosecutors.

Though hers is the smallest county in Texas, she has served as president of the Texas District and County Attorneys Association and a delegate to the National District Attorneys Association, and was named the 2021 Texas Prosecutor of the Year for her innovative efforts to keep the criminal-justice system running during the Covid-19 pandemic.

Even defense lawyers respect her. One remarked: “Kenda Culpepper is not only tough on crime, she is smart on crime—using all available resources to try to make sure the right man or woman is charged. Her ethics and professionalism make her a role model for all law enforcement officers.”

Come Join Us On Facebook! We’re Having A Blast!

To All our Military Veterans who have served this Great Nation, We Salute You and Thank You for your service & sacrifice!
Happy Veterans Day!!

DID YOU KNOW?
At exactly 11:11 a.m. every Veteran’s Day (Nov. 11), the sun aligns perfectly with the Anthem Veteran’s Memorial in Arizona to shine through the ellipses of the five marble pillars representing each branch of the Armed Forces, illuminating The Great Seal of the United States! God Bless the USA, its Military & Veterans!

This is our 7th year hosting the Rockwall County Bike for Tykes Teddy Bear Ride!!

All proceeds go to the kids at The Children’s Advocacy Center (CAC) in Rockwall, TX.

America’s Guardians MC is a cornerstone supporter of the CAC!!

The CAC runs solely on donations.

There are several ways — large and small — for you to participate & help support this incredible organization!

Our CAC is open for the kids in their greatest hour of need, and offers multiple in-house services.

All of the kids that come in get to pick out their own bear, this gives them a little something to hold onto and clutch as their own after enduring a traumatic event.

When family violence happens, The CAC helps them get through this.

All of this is very traumatic for children, The Rockwall CAC has all of these services under one roof.

All of the money raised in our Teddy Bear Ride supports this program.

The CAC depends on donations from the community to help keep the facility staffed and fully prepared to help these kids.

By April of 2022, unfortunately, Rockwall CAC has experienced a 70% increase in child abuse in our community.

Not only does our Teddy Bear Ride collect Teddy Bears, but we also raised $40,000.00 this past year to help maintain this center and support the work they do.

You can learn more about The Rockwall Children’s Advocacy Center by clicking on the link. 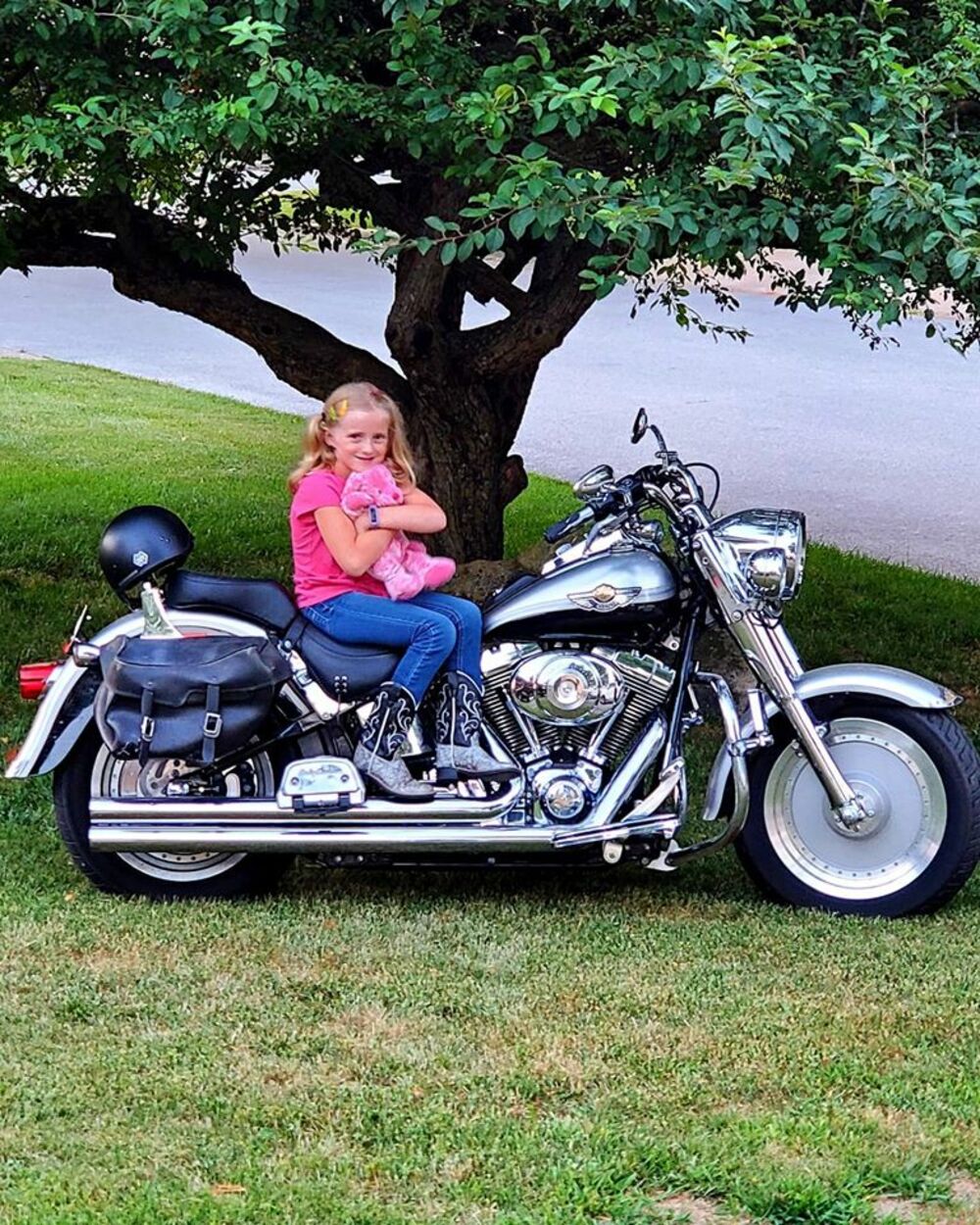 A Powerful Video From Abuse Survivor

Often we don’t ever hear about the long-range effects of child abuse.

Please take a few minutes to listen to this short video from an abuse survivor.

Detective Timothy Rountree is a highly decorated child abuse detective and pastor of a church in Dallas — he was also sexually abused as a child. He was the Keynote Speaker at the International Crimes Against Children Conference 2020.

To get a FREE copy of the first chapter of Outcry visit outcryconcepts.com.

America’s Guardians MC is A Founding Guild Member for The CAC in Rockwall, TX.

Our Oath of Commitment: We are able and willing to help those who can not help themselves. Living the standards of our chosen professions. We are Freedom Warriors.

By making a donation to our event, you will be helping us in improving the lives of children in Rockwall County and allowing us to continue our mission of making a difference.

Our children are the future! 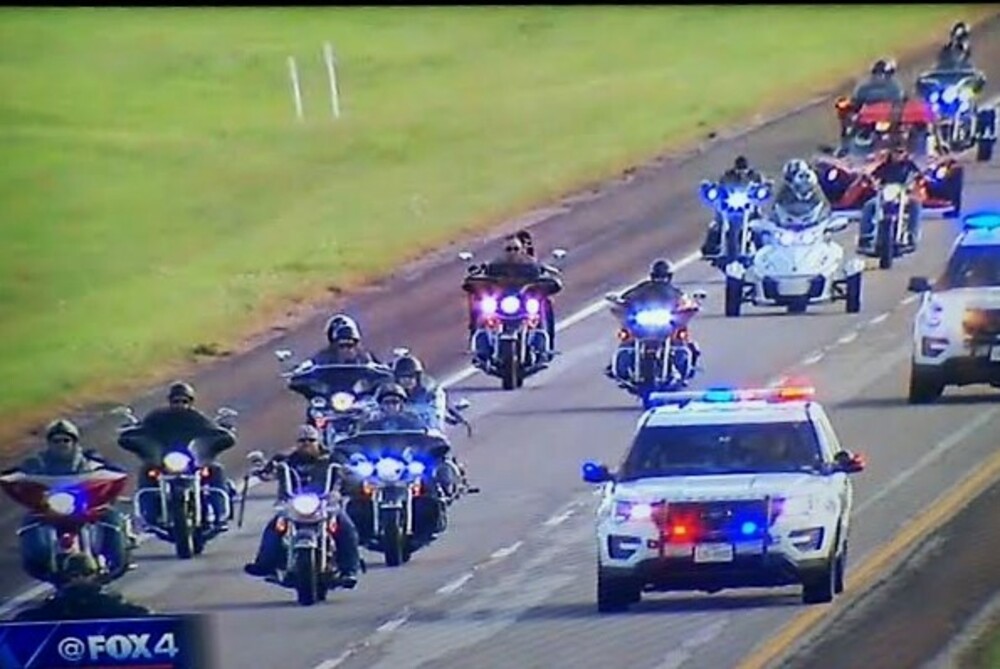 We LOVE Our Group of Eclectic Vendors!

Deadline to register is Sept 8th! 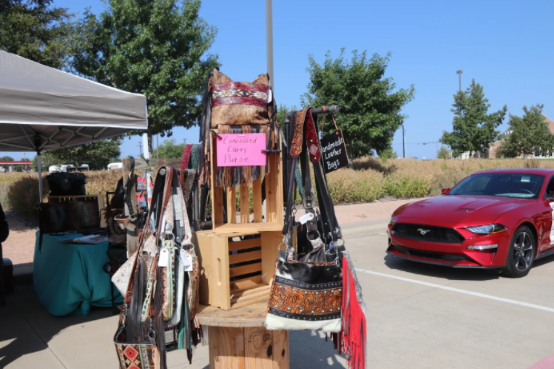 We have plenty of room for all sorts of vendors from food trucks to merchandise tents.

That  fee is refundable to you on the day of the ride when you set up your booth.

Be prepared to be fully self-contained as we can’t offer electricity.

You can unload right at your space and then park your vehicle.

Each year we advertise locally and often get some awesome news coverage from local Dallas TV Stations!

We are growing as an event every year and getting bigger all the time.

We are setting up in the parking lot at the courthouse.

This is a really fun event with riders traveling in from all over the country to be a part of it.

There are a lot of Rockwall community locals that come out to this event. It is a family event with a great silent auction and always fun to see the motorcycles rolling in.

Harley Davidson will be there as our anchor vendor.

The parking spots are generous.

Reserve your space below!

Both of these charges are refundable at the ride when you set up, or you can make this as a donation to our event.

If you have questions, please contact Cowgirl or Mad Dog at
maddog@agnation.org

Thank you for your consideration!!

Thank YOU In Advance!

Our Silent Auction Is Jam-Packed With Goodies!!

Learn more about what we do with our Silent Auction…

Every year our community donates items, services, and even vacations for our silent auction.

The silent auction brings in a lot of needed funds to keep the services going at the CAC !

We normally have everything from fancy guns & knives to leather jackets and jewelry and much more!

When you donate an item to the auction, we set the starting bid at half the price. You will receive a receipt of your donation for your tax purposes.

This is a fun event the whole family can enjoy, we always have many items for kids 🙂

We all have something to share that can make a big difference for the kids of the community.

If you would like to donate an item or service for the 2022 auction, Email us and let us know what you have in mind!!
Maddog@agnation.org 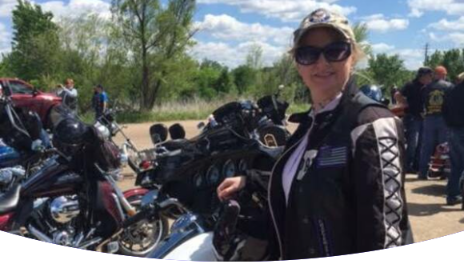 Passenger rides free, pre-register for the ride below! 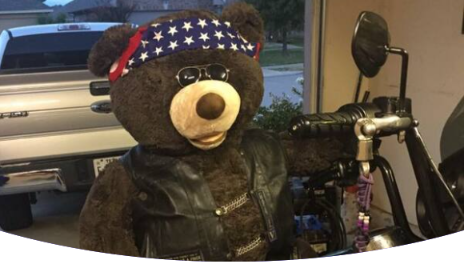 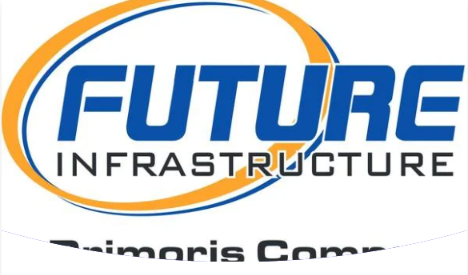 When you become a Presenting Sponsor we add your name and logo to our event T-Shirt Top Centered, and place your name and logo, and link on our website, the CAC website, our Social Media, and on our HUGE Bear Pit Banner. If you wish you can have vendor space. You may also choose to speak at our ride. The Cost is $7,500. Use the button below to become a Presenting Sponsor. If you’d prefer to write a check, that is fine, too! 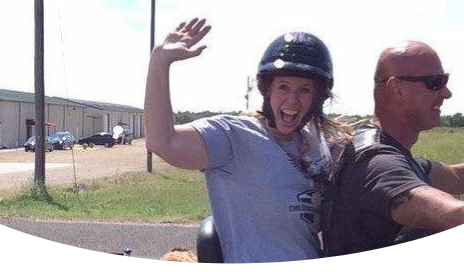 When you become a Grand Marshall Sponsor you have the option to LEAD the ride behind our Police Escort with either your company car/truck or motorcycle. We add your name and logo to our event T-Shirt below the Presenting Sponsor and place your name and logo, and link on our website, the CAC website, our Social Media, and on our HUGE Bear Pit Banner. If you wish you can have vendor space. The cost is $5,000. Use the button below to become a Grand Marshall Sponsor. If you’d prefer to write a check, that is fine, too! 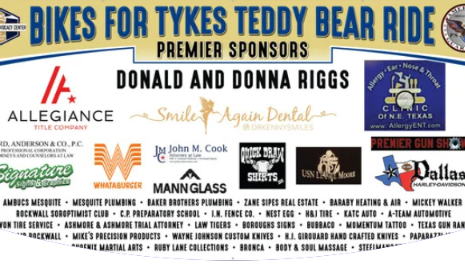 When you become a Diamond Sponsor we add your name and logo to our event T-Shirt below the Presenting Sponsor and place your name and logo on our website, the CAC website, our Social Media, and on our HUGE Bear Pit Banner. You can also have vendor space. The cost is $3,000. Use the button below to become a Diamond Sponsor. If you’d prefer to write a check, that is fine, too! 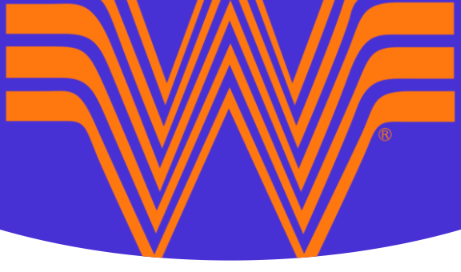 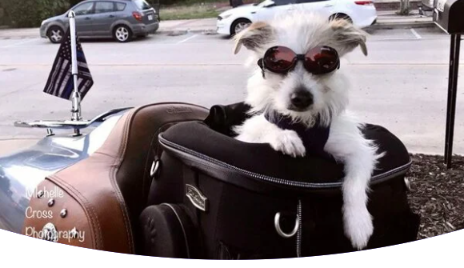 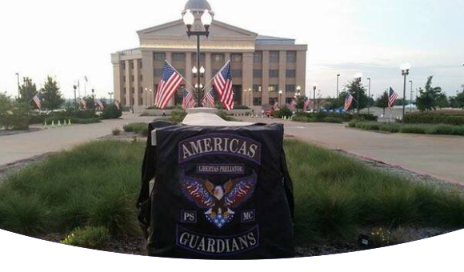 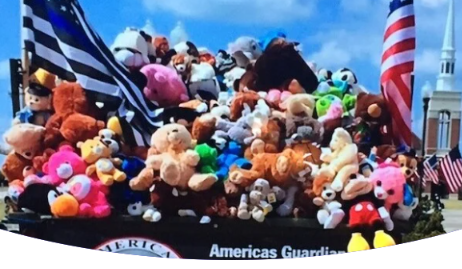 Thank you for your $50 contribution! Please use the button below to become a Hero Sponsor!

Sign up for our newsletter and stay up to date

Learn more about why we do what we do!

“We are America’s Guardians Motorcycle Club.  Able and willing to help those who cannot help themselves. Living the standard of our chosen Profession. We are Freedoms Warriors!”

“Libertas Preliator”
Libertas is Latin for Freedom and Preliator is Latin for Warrior
We strive to continue our commitment to duty and honor. Our motto is a constant reminder that we must always look to help, protect and serve those who cannot do it alone.

The Children of Rockwall County appreciate your efforts on their behalf, Thank you ! Dismiss